Can AT&T remain the 20th century communications powerhouse we came to love (and hate)?  Or will they eventually relinquish their throne to an up-and-comer with a better grip of today’s communication technology needs?

This question can be heard reverberating around the business world like a never-ending echo throughout the grand canyon.  If there is one company that can displace the conglomerate with respects to providing a basic communication platform for the general public, I think it could be Twilio.

Twilio provides infrastructure APIs for businesses to build scalable, reliable voice and text messaging apps.  They provide all this so cost effectively they are seeing massive growth and are a powering a new class of startups, ones that extend their technology to touch almost every part of our society.

To realize my words aren’t mere blasphemy, it’s paramount to grasp the difference between two types of innovation: sustaining and disruptive, these types being best described in The Innovators Dilemma by author Clayton Christensen.  Sustaining innovations are improvements that make the product better, but do not threaten its market.  Disruptive innovation, conversely, threatens to displace a product altogether.  It’s the difference between the electronic typewriter, which improved the typewriter, or the word processor, which supplanted it.

AT&T is the Typewriter.  Twilio looks to be the Word Processor.

The history of AT&T is well documented in the book The Master Switch by Tim Wu.  He describes how the great telephony company, started by Alexander Graham Bell, navigates an incredible path towards dominating the communication wires for most of the 20th century.

What strikes me interesting when I read the great history of AT&T is the repugnance of anything innovative on top of their communications platform.  Was being protective and narrow minded regarding innovation just en vogue thinking of the times?  Or was this perspective so ingrained in the company culture led by visionary (and monopolist) Theodore Vail that it grew stronger as decades past?

They exhibited classic sustaining innovation characteristics.  According to Wu: “AT&T, as an innovator, bore a serious genetic flaw, it could not originate technologies that might, by the remotest possibility, threaten the Bell system.  Disrpuptive technologies, those that might even cast a shadow of uncertainty over the business model, were simply out of the question.”

More interesting is to wonder if this still the case today?  AT&T is hard at work protecting their lot – cell phones, digital TV, Internet, and the traditional phone service.   So hard at work they are, they fought to acquire close competitor T-Mobile, just another chapter in the centuries long monopolistic story.  Losing the acquisition places AT&T at an interesting crossroads, where they must look in the mirror and choose what type of communications company they should be going forward.   They also seem to be backpedaling on data usage, specifically text messaging, at a time when messaging seems destined to become our main mode of communication.

The real question is are they embracing the new way of business, opening up and encouraging disruptive innovation, from themselves and also from others?  Or are they still about sustaining innovation and stifling anything would that attack their own den?

Twilio, on the other hand  was created to be built upon.  They have innovation running through their veins and pouring out their ears.  Why?  Because they understand the new rules of business – better in the long run to open up, provide basic communication technology to the masses and empower innovative ideas as a platform rather than remain closed and stifle anything that might attack their business model.  They understand technology moves faster than they do so the best position to be in is as a platform.  They understand they will touch more end users by encouraging innovation using their service.  An even better way to think about Twilio’s business model is it’s all about disruptive innovation.

How did Twilio get traction in such a challenging communications ecosystem dominated by the likes of AT&T?  According to  Quora:

One answer points to how developer friendly they are and how much they are ingrained  in the emerging startup culture. “Twilio’s API is beyond awesome. It’s light, it’s fast, and there is no shortage of documentation. They’ve built this from the ground up with developers in mind.

Also, Danielle Morrill is everywhere, all the time, and doing everything. It seemed like every event I attended she would be there preaching the Twilio gospel. If she wasn’t speaking at the event she was probably in the crowd hacking with other attendees, giving out Twilio account credits, or showering people with Twilio merch (stickers, shirts, etc).  There’s no doubt in my mind that without her contribution to the company we would be looking at an entirely different Twilio today

Even investor Fred Wilson mentioned in early 2010 the unique nature to Twilio and why they have grown so quickly.  “We believe that one way to build a large network of web users is to build something that makes developers’ lives easier. And Twilio does exactly that. It masks all the complexity of telephony into a finite number of API calls that web developers can use to build apps quickly and easily.”

USV partner Albert Wenger takes it a step farther,  “Twilio has accomplished even more. It has made telephony a bona fide citizen of the Internet, by working on the basis of URLs. This is a profound transformation. Not only does it mean that web development skills can now be applied to telephony. But more importantly, telephony is changing from a closed to an open system in which adding new capabilities now becomes as simple as chaining together web service requests.”

The stance about being developer friendly is exactly why I believe the future is shining brightly for Twilio and particularly cloudy for traditional communications companies like AT&T.

Imagine if AT&T would have realized it’s not enough to just provide people the ability to communicate, but the opportunity to build communication platforms on top of their own platform?  I can only imagine if they were empowering thousands of small and large companies to embrace and extend their technology for the sake of innovation.  Supporting such things as offering $20,000 cash prizes at Hackathons, like this one happening at the upcoming CES, helps get the ball rolling but AT&T’s reluctance to embrace the disruptive technologies and attitudes is classic innovators dilema in action.

New companies building on top of Twilio’s communication functionality have the opportunity to bring communications to the masses for incredibly low cost – if not free.  Seconds, the startup I co-founded last fall is offering messaging functionality to merchants so they can quickly communicate with customers and transact through their mobile device.  Merchants and businesses, the other half of society, have yet to experience the tremendous benefit of messing and quick text communications, and it’s ripe for disruption. I’m not seeing AT&T offering text messaging to local businesses the way the offer it to mobile subscribers.

Twilio even has a small investment fund to encourage startups to expand using their platform.   The startups receiving investment from the first fund include:

Magnolia Prime, which delivers voice messages to elderly patients, as configured by the patient’s clinician or caregiver. Callyo, also quite practical, aims to offer multifaceted crisis, emergency and tip line options for police departments. knockknock, targeted at businesses and consumers, routes phone systems to put consumers in touch with the customer service reps at the companies they want to speak with. FastCall411 aims to be the aide of the local salesman with call recording, analytics and lead scoring, while Volta serves as an A/B testing framework for outbound phone calls. And WorkersNow expedites the hiring process around contract construction gigs. Less practical, but more fun is applying Twilio’s texting capabilities to the sexting fancies of teens and young adults. Qwipd, for instance, can be used to convey flirtatious, albeit controlled, text messages with choose-your-own-ending flavor.

A major Twilio success recently came from GroupMe, born from TC disrupt in 2010 and purchased by Skype for a reported $85 million a year later.  They were powered by Twilio. 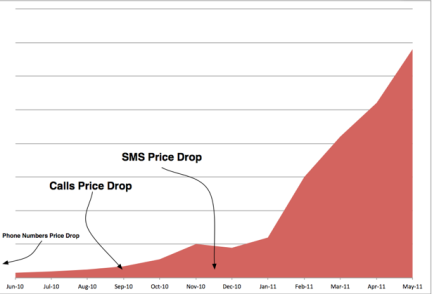 Twilio recently raised a $17 million Series C round of funding to maintain momentum after a big year, and continue hiring aggressively. The San Francisco-based company grew from 25 employees to nearly 100 in 2011, and increased its customer base by 400% to reach 75,000 developers.  Their usage has be nothing but astounding; notice the growth chart to the right.  After a few price drops in 2010 Twilio saw volume skyrocket and hasn’t looked back since.  They also recently announced an international expansion, to Canada and Europe so by no means will this trend slow down.

My question is:  What does Twilio look like in 5 years if they keep attracting young, innovating startups to leverage their communications platform for dirt cheap to bring radical change to our society?

The end goal for Twilio is to “open the black box of telecom, and move the world away from the legacy of Cisco and Microsoft’s big expensive [hardware] that you put in your closet and watch age. We’re reinventing with the cloud, and it gets better every time we deploy code.”

And what does AT&T look like in 5 years if they don’t do the same?  But what if they do?  Something is going to have to give…