See the lonely man there on the corner,
What he’s waiting for, I don’t know,
But he waits everyday now.
He’s just waiting for something to show.

Disclaimer: What I am about to write is controversial.  As you read please remember this does not insinuate I lack caring in my heart for human beings of all levels of society.  It is merely my opinion of how a person chooses to live their life and what opportunities a person chooses to act upon.  There are no right or wrongs here, just observations and thoughts.  Also, it is important to note the thoughts below regard what people are choosing to do in the moment of poverty, not how they got into poverty in the first place.  I anticipate differing perspectives and opinions to be shared in comments. 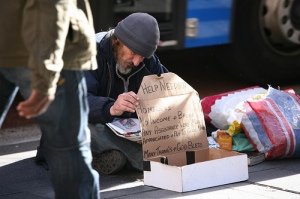 You’ve seen him.  He’s the lonely man over there on the corner.  What he is waiting for nobody knows.  But he waits everyday, and he’s just waiting for something to show.  The quotes throughout this article are lyrics from a song Man on the Corner by Genesis. The video is below and it’s a must listen.   I recently listened to it and was shook by the emotions I felt during the song.  And so I started to think deeper on the concept of poverty.  I started to think about why some are rich; why some are poor; why I drive a nice car and some are stuck wearing the same clothes every day.  I asked myself, “what could possibly be the difference?”  And why some people find themselves on a street corner just waiting for ‘something to show’.  You may differ in your perspective on poverty in this country, but I believe poverty and entrepreneurship are distant cousins.

This man chooses to sit on a corner and hold a sign.  He has nothing (at least from what we know) and feels his best option is to do nothing, look desperate, and ask for money.  His value proposition rests on the morality of another person feeling remorse when they pass him, forcing themselves to face their inner soul and ask “am I a bad person if I turn my head and don’t give him money?”  He wants to be given something for nothing.  He takes from the world, but does not give in return.  He offers no product in which a dollar value can be placed on it and he has no service to offer another.  He just sits and asks for help.  He has chosen to do nothing. 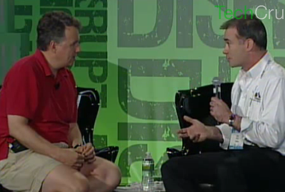 For those have not picked up on it, the man in the image at left is a person pitching Paul Graham (an investor in the red shirt) on a business idea in hopes he will invest money towards his vision.  But in contrast to the man on the corner, the man on the hot seat does not believe in handouts or in receiving something for nothing.  He believes in creating value through enterprise.  He knows that if you have something, anything – a product, a service, a distribution channel, knowledge, land, a water source, natural elements, really anything – you can offer it to another for a profit.  He chooses to live his life working hard to add value to society, not take away from it.  He has taken ownership and responsibility for his life, understanding he can choose to do anything he wants with it.  But with that decision he knows it is up to him, and only him to make it happen .  The man in the hot seat is an entrepreneur.

Looking everywhere at no one,
He sees everything and nothing at all – oh.
When he shouts, nobody listens,
Where he leads no one will go – oh.

At times entrepreneurs find themselves looking poverty straight in the face.  It might be in a situation where their income (or lack thereof) cannot fulfill the demands of their debts, whether it is a roof for shelter, food for sustenance or gas for their travel.  They choose to risk their current stability for the return of a better life.  There is an eerie aspect of entrepreneurship and I think it’s due to its distant cousin of poverty.  The mere thought of poverty can be the biggest moving force an entrepreneur receives.   It is incredibly scary and immensely motivating at the same time.  Only in risk one really experiences reward.  So we endure the possibility of poverty for the reward of wealth.

For the record, I am quite privileged to have a roof over my head, food to sustain my health and a nice car to drive each day.  I am doing fine but at this point in my life I hover right above to line, choosing to forgo a stable job for a chance to determine my own destiny.  Also for the record I have stared poverty in the eye and experienced what it could be like.  I have had my electricity turned off and creditors calling my phone for not paying bills on time.  I have had to dig change out of my car to buy a $.99 hamburger.   As a late-twenties ambitious entrepreneur who hadn’t “made it” yet – old enough to be established on my own but young enough to have not built sustainable wealth for myself – it’s was a tough slog.   I’m a tweener as they call them.

When you leave a stable financial situation and leap towards your dream, you risk falling into poverty.  Or should I say you learn how to operate with poverty as a strong possibility in your life.  You learn how to acknowledge where your responsibilities lay in the equation of life.  You start to realize your decisions will make or break you.  It is through this experience I start to think about poverty in a new way.   Whenever I drive by the man on the corner, I cannot help but think: “I could be out there right now.  That could be me.  As I am sitting here in my car it is unbeknownst to me how I will pay rent next month since I just took the leap and started my life as a full time entrepreneur.  But I will find a way.  I will find a way to not only pay rent but to grow my business as well.  I will choose to do something, not sit and do nothing. ”  I argue it is at this point of realization you really become an entrepreneur.

So Here’s the difference between poverty and success:

The man on the corner waits for something to fall into his lap, hands or box.  He takes no responsibility for his actions and believes by just waiting, help will find it’s way to him.  The man in the hot seat acts, on everything.  He believes it is through doing something, anything really, value can be created.  And when he creates value, wealth will find it’s way to him.  It is by doing and acting we entrepreneurs find success.

Man on corner values nothing; man in hot seat values everything

The man on the corner values nothing, not even himself.  If he did value himself, he would be doing something other than sitting desperately on a corner asking for a handout.  He has lost the ability to place value on anything in his life, thus has nothing.  The man in the hot seat values everything, especially himself.  He has such a belief himself he is asking others to invest large sums of money into his enterprise.  And he believes so strongly in himself he knows he can bring the investment amount times X back to the investor.  It is through immense value in self an entrepreneur will be successful.

The man on the corner has ultimately bought into the victim mentality, meaning their outer circumstances determine their inner self worth.  A victim does not take responsibility for actions and outcomes, therefore they do nothing to change their circumstances.  The man on the hot seat understands it is he who determines his destiny and thus plays the hero.  A hero understands they are unique and hold power to orchestrate a positive outcome for all involved.  By believing you as an entrepreneur are the hero, your self worth has nothing to do with outer circumstances.  This frees you up to act according to your vision and experience success.

I am not sure Phil Collins would agree with my interpretation of Man on the Corner but I am curious if you do.