Ok, let’s all agree we get scared sometimes.  So what.

I want to dissect the notion of being afraid and why it shouldn’t get in your way.

I was having a conversation recently where I blurted out “basically, WE are the only ones getting in our own way of doing whatever we want to do.”  It came out in response to the person describing the challenges they had been experiencing over the course of the last year or two.  These challenges were rooted in pain they felt from a previous experience, and they were acting similar to the kid who burns his hand on the hot stove and didn’t wouldn’t go back and try it again. 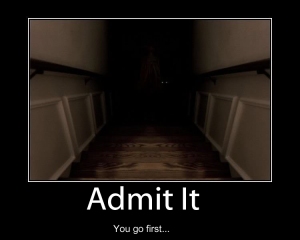 (To finish the analogy, it’s not that the stove is always hot, children learn to observe other things around the stove to help them determine if it’s hot dangerous or if it’s indeed safe to touch.  So should we in other areas of our life.)

I have a sneaking suspicion most people go through their life not acknowledging this truism of being scared.  If they did, they wouldn’t be frozen in a state of  hesitation and frustration, being stuck in a rut and not achieving things in life the way they know they can.

I think the first step out of this rut is to acknowledge your fear and then looking deeper into why you are scared and how to navigate around it.  How you say? Simply shouting out loud “Yes, this is scary.  I don’t know if I can actually follow through with what they are expecting me to do” will go a long way to subside those fears.  Also, once vocally identified we can now pull off the layers and find out what exactly is holding us back.  Usually it’s  something petty and small.

But it’s not that we are scared.  It’s how we overcome those fears through courage that will move you forward.

Think about when you were young and you overcame the fear of the dark.  At first, it was really scary and you hesitated to go into a dark room or fall asleep without a night light. You thought monsters, murderers, big animals or other scary things were waiting for you.  So you just couldn’t have it pitch black.  But over time you took small steps to overcome your fear of the dark, until the time came where you shut off the light and realized “Ha, this is fine!  I am not afraid of the dark anymore.”

Well, that’s how it works in the real world as well.

How do I know?

I have been through it.  As confident as some people may seem, we all have worries and can become afraid of certain things in life.    Being a founder of my own startup, I had to overcome many different scary situations which ended up holding me back.  For me it tended to be investors or people who were more successful than I was in the industry.   My initial feeling  was they would look into my past and judge me for not having the proper credentials or successful previous outcomes that other founders they talk to may have.  I imagined them saying “who does he think he is and how does he think he can achieve that!”   I was self-conscious of my degree, which is in the human sciences rather than the computer sciences.

I was also scared of what people would think if and when I failed.  Would they just say “ha, I knew it.  I knew he wouldn’t be able to do it.”

But you know what?  Who the hell cares!  Who cares what anyone says – when you succeed as well as when you fail.  Just like when you were young you basically came to the realization it’s pretty much impossible a huge monster is in your room.

So the first thing to do is get out of your own way.  Then get over yourself and others.  And then, actually identify what freaks you out.  Lastly, go attack it head on and see it crumble right in front of you.